“It’s such a fine line between stupid, and clever.”

Rob Reiner’s 1984 Mockumentary, This is Spinal Tap, is replete with classic quotations. From “This one goes to 11!” to “Hello Cleveland!” the movie does a wonderful job mocking a time period and the world of music entertainment. Along with Rock of Ages and Rock Star, the movie plays to the adolescent dreams of everyone…especially males. Everyone wants to be a rock star. (Some of these adolescent dreams persist into adulthood and on into retirement! …just check out the old dudes with pony tales, fingerless gloves, and sleeveless leather jackets)

The vast majority of these want-to-be’s never fulfill their rock star dreams. For these dreamers, reality hits quick and hard. Whether it’s a cracking voice, the G-cord, or a failed drumming attempt, most “rock stars” quickly fall back into fandom. Once back in fandom, the first realization is…the next best thing to being a rock star…is being backstage with the rock star. Gaining access backstage is far easier than slaving away in the basement with guitar or pounding drums in the garage. Thus begins the quest for the backstage pass!

Once a backstage pass is achieved no other seat will do. The lanyard & laminated pass around the neck feeds the ego like nothing else…other than a guitar strap. The ability to go places others cannot…is thrilling. To be considered a VIP…wow, what a rush!

A “guest of honor” is as close to rock star status as many of us will ever get. With that in mind, Tequila Sheila works to treat all our honorees like rock stars. From special food service to special seating to special menu…maybe even a special drink or two. We cater to the rock star in all of us.

As we all know, getting special treatment is nice, but its worth nothing, if no one knows about it. Thus, we created the Tequila Sheila VIP pass.   Laminated and hanging from a lanyard, the pass identifies the honoree(s) and provides them all access during the event…and future events, as well. 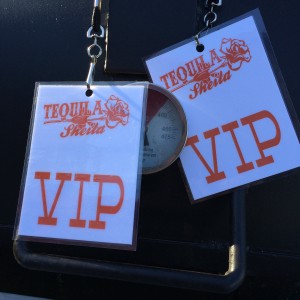 Although we always walk the fine line between clever and stupid, we think this is pretty clever!